Early Connections-West Side was presented with the Bright Star Award, sponsored by the Northwest Institute of Research and Clarion University at a special ceremony on February 28, 2014 in Erie.

Under the direction of Stephanie King, Early Connections-West Side was nominated for its strong partnership with the City of Erie School District and the Northwest Tri-County Intermediate Unit’s Early Intervention Program, as well as for its voluntary participation in the PA Keys’ Family Focus Group Project. 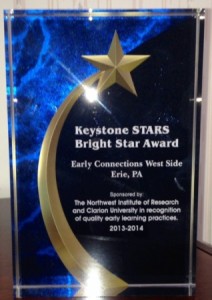 Congratulations to the entire West Side staff, especially Stephanie King, and executive and associate directors Nancy Kalista and Darlene Kovacs for a job well done, as well as to Early Connections-West Side’s preschool children who played a big part in the ceremony.